Residence Bassac is located in the attractive, small town of Champasak.
Once known as Bassac, from which our hotel takes its name, the town has a unique character and comprises nine villages.

By taking the main street on the right, continue for 10 kilometers to reach Wat Phou and the other ruins in the grounds.

This famous temple of Wat Phou (“Temple of the Mountain”), the various archaeological sites, and its landscapes are classified as a World Heritage Site by UNESCO.

The construction of Wat Phou began in the ninth century on the sacred mountain of Phou Khao and was the second Buddhist site in Laos.

Wat Phou welcomes more than 100,000 visitors every year during its festival. The temple is located at the top of a mountain and you will have to climb its many steps bordered with sweet smelling, old, twisted frangipani bushes.

The panorama from the top of the mountain is breathtaking, and the temple, though quite small, is bewitching. It is better to go in the early morning or late afternoon to avoid the blazing sun and take your time to make the climb at your own pace.

The Wat Phou Museum is very interesting for visitors wishing to learn more about this pre-Angkorian site, and it contains some lovely artifacts. 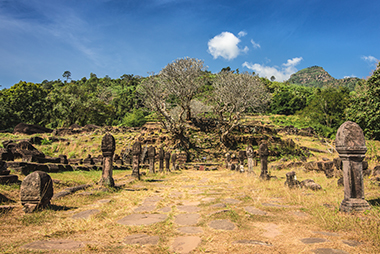 Some 2.5 kilometers south of Wat Phou, lies the intriguing ruins of Hong Nang Sida. This temple was built by a King whose daughter sacrificed her life to save her father’s. The latter, overwhelmed by this gesture of ultimate love, dedicated a temple to her which was already in ruins when first discovered. Each of its stones and artifacts are currently listed for a major restoration project.

During the decline of the Khmer empire in the 14th century, its people migrated to the river and around various sacred natural sites such as mountains, springs or rivers that are of a religious and mystical symbolism still today.

The oldest historical remains of Champasak are traces of more than a thousand years of human occupation that are gradually being brought to light from the notes of the first explorers to the present time.

The architecture of the various monuments of the Ancient City is organized in an axial figure, from Hong Nang Sida, through Vat Phou and Nong Din Chi, a site recently discovered on the mountain Phou Malong, which is located on the Pakse road to Champasak.

This architectural, cultural, and historical mosaic makes Champasak an absolutely fascinating place, all set in a landscape mixing shimmering colors, the serenity of the Mekong, and the mountainous panoramas. 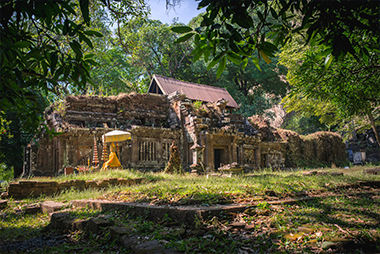 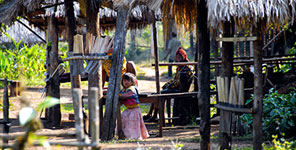 When you visit Champasak, your pleasure starts along the roads that lead to the town.  Sitting 30 kilometres from the provincial capital of Pakse… 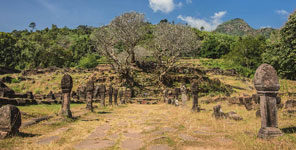 If you choose to return to Pakse along the east bank of the Mekong, you can take the ferry with your vehicle at Ban Lak Sisip (around 40 kilometres from Champasak). 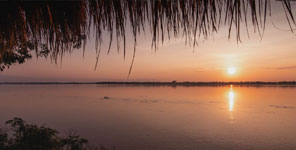 It is also possible to go to Champasak by boat from Pakse, either as a group, or by private boat or by a multi-day cruise. Whatever your preference… 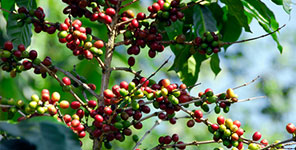 Champasak is the ideal starting point to explore the region. From here you can easily reach the 4,000 Islands and Bolaven Plateau, as well as Pakse.